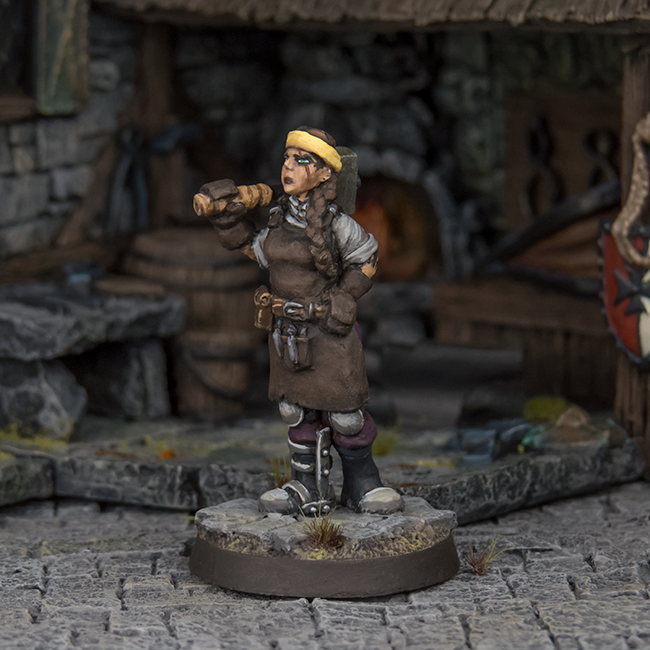 Erika used to serve in the finest Stronghold regiment, But after almost losing her leg in combat, she was forced to retire and return to Stronghold where she was born and raised.
For now she’s stuck in a smithy hammering on an anvil all day long while all she longs for is to swing her sword in combat just one more time. She now runs Schmidt Blacksmithing with her brother & an impressive golem named “Black Daniels”.

“The sound of a hammer hitting an anvil rang out over and over through the modest blacksmith’s workshop only to be interrupted by the occasional curse and rant from Erika Schmidt, the newly appointed blacksmith’s apprentice currently hammering on the anvil.

“Gods be damned! Is this stupid contraption making my leg better or worse??!!” Erika shouted out as she paused to rub her leg.

In truth, it wasn’t her injured leg that was aggravating Erika.. Not long ago, she was a soldier – serving in the finest regiment in the region. But after almost losing her leg in combat, she was forced to retire and return to Stronghold, her home.

And now here she is, stuck in a smithy along with her brother, hammering on an anvil all day long while all she longs for is to swing her trusty sword in combat just one more time.

“Snap out of it sister… Father would’ve been proud to see us working together, remember that. Now, why don’t you be a good lass and ‘hop’ over there and fetch me that mug of water?” Her brother said with a cheeky grin on his face.

“Get your own damn mug of water! I might be your apprentice but I’m not your servant“ Erika shouted back.

“Well, I know what you’re thinking about sister.. But you must accept that you won’t be doing any fighting anytime soon. Although… I have heard that our dear Burgomeister is looking for new guards. You could experience some serious action, like beating up drunks and hunting down smugglers and thieves. “

“Yea… no thanks. I’d rather have both my legs hacked off with a rusty axe than work for that fat, obnoxious bastard.. But then again, perhaps it would be preferable to working for my annoying little brother.. ”

Her brother smiled, “Well, that’s the only sort of combat you’ll experience here in Stronghold, so how about just accepting that this is your fate now and perhaps pass me that mug of water over there?“

Erika ignored him and started hammering on the anvil again, her thoughts once more wandering to her beloved sword, safely tucked away at home.