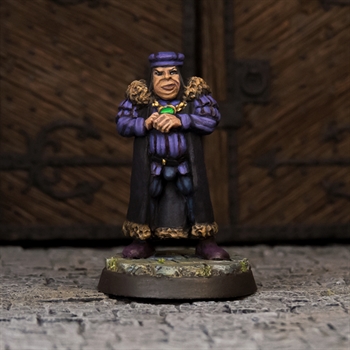 Herman Geizhals, the most important person in all of Troop (At least if you ask him). Herman is a villainous person who throws lavish feasts for the nobility while the poor townsfolk starve. He’s a greedy person who only puts his own interests first. How he gets reelected every term is beyond comprehension!

“The servant took a deep breath to calm his nerves, mustered what little courage he could, and then knocked three times before slowly opening the door.
”S-sir? I’ve brought you your evening snack”
“About damn time!” shouted a wet, corpulent voice “But at least you have learned to knock three times before entering, so I can assume you are not a complete halfwit.”
“Yes sir, th-thank you v-very much sir”, the servant stammered as he edged slowly towards the Burgomeister.

The Burgomeister didn’t even bother to turn around to look at him. He sat at his large, ornamental desk, staring out of his study window at the night sky and the moon that was casting an eerie glow over Stronghold.

The servant, trying to steady his shaking hands, mumbled a question. “Begging your pardon sir, but where would sir like the tray placed?”
The Burgomeister slowly lifted his fleshy, meaty bulk from the chair, turned and glared at the poor wretch, and shouted “Just put it right there and get out of my sight you cloying filth! I have great matters to consider, and your presence is a distraction I will not tolerate! GET OUT!”

The servant scurried quickly from the room, careful not to knock over anything and make his master even angrier. The Burgomeister lustfully stared at the giant meat filled platter, and excitedly licked his lips.

After every last morsel of meat, gristle, and fat had been finished, he poured himself a brandy and once again looked out his window.
“Miserable, worthless ants.” he muttered to himself. “They don’t even know how good they have it. I do everything for them, and what thanks do I get? Not a single thank you. No flowers, no gifts, nothing! They owe everything to me!”